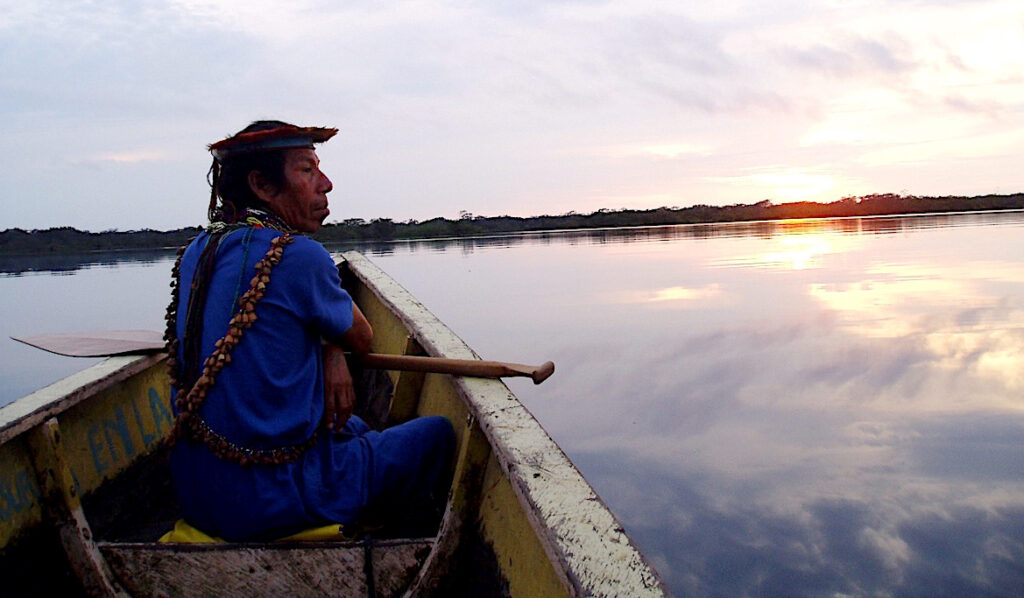 Ten identified Indigenous civilizations, approximately 125,000 people, inhabit the Ecuadorian Amazon- Achuar, Ai´Cofan, Huaorani, Quichua, Secoya, Shiwar, Shuar, Siona, Taromenani and Zaparo. Over many centuries, the common denominator amongst these communities is their belief that the Rainforest is sacred and the source of all life. The Rainforest is the genesis of traditions, spiritual life and ancestral medicine, and constitutes the essence of cultural values.  This implies that life is based on a harmonious equilibrium and reciprocity between humans, flora and fauna.

Amazonian civilizations practice the cult of “Yage” as a means to acquire knowledge, consolidate power and to communicate with supernatural powers.  They believe in a universe consisting of two worlds – an underground world inhabited by mortals, referred to as  “the house of the earth”, and a celestial world, home of the spirits of all species who made the transition from “the house of the earth.”

Historically the Amazon indigenous people were nomad hunters and gatherers who satisfied their basic needs by following the seasonal migrations of animals in an area extending over 30 million hectares – stretching from Colombia in the north and north east, through Ecuador to  Peru in the south.

Since 1960, this area has been drastically reduced as a result of oil, mining and the expansion of the agricultural frontier. Indigenous mortality rates coincide with deforestation and loss of ancestral lands- both in time and in percentages.  We have documented a drastic reduction of the Secoya and Siona population since 1985, approximately 73% and 60% respectively. The plight of the Ai’Cofanes is particularly bleak. They have been the victims of genocide, land displacement and diseases such as flu, measles and smallpox.  Prior to 1970, the total Ai’Cofan population was estimated at 15,000 people.  Today only 700 survive, a shocking 95.4% decline.

What is also Alarming to Know is that in 2021, the vast majority of Amazon communities live on the border lines of extreme poverty.

Historians are the first to point out that fate of Amazonian nomads appears to be part of a global tendency over time, while humanity looks on and remains indifferent. This clearly was the case for the Pygmies of the Congo, the Madera herders of Kenya, Chinese nomads during the Han period, the Scythrians or Sakas in Western Central Asia and the Oceti Sakowin Native American and First Nations peoples in the United States.

There is however one major difference. The Amazon Nationalities are the natural guardians of the Amazon Rainforest and their fate is intertwined with the eco-system. Given the universal significance of the Amazon Rain Forest, the international community does not have the luxury of remaining neutral because the human and environmental destruction of this region would have disastrous consequences in terms of global warming and climate change.

Call it reciprocity, call it self-interest, or call it self-preservation for you and your future generations. It really does not matter. The important issue is to act and join SELVA-Vida Sin Fronteras in finding concrete and pragmatic solutions to challenge the ever-accelerating destruction of one of the most significant and species rich ecosystems known to humanity.