The UNESCO Declarations highlight the extra-ordinary significance of Galapagos, emphasizing the following distinctions:

The archipelago and its immense marine reserve are known as the unique living museums and showcases of evolution. Its geographical location at the confluence of three ocean currents makes it one of the richest marine ecosystems in the world.

Ongoing seismic and volcanic activity reflects the processes that formed the islands. These processes, together with the extreme isolation of the islands, led to the development of unusual plant and animal life. Emblematic taxa include giant tortoises and land iguanas, the most northerly species of penguin, flightless cormorants as well as the historically important Darwin’s finches and Galapagos mockingbirds.

Endemic flora such as the giant daisy trees Scalesia spp. and many other genera have also emanated on the islands, part of a native flora including about 500 vascular plant species of which about 180 are endemic. Examples of endemic and threatened species include 12 native terrestrial mammal species -11 endemic, with 10 threatened or extinct- and 36 reptile species -all endemic and most considered threatened or extinct-, including the only marine iguana in the world.

These species are living examples of Darwin’s theories that suggest that the driving force of evolution is the accumulation of genetic changes over time, influenced by the habitat and rigours of natural selection.

The Galapagos Marine Reserve is an underwater wildlife spectacle with abundant life ranging from corals to sharks to penguins to marine mammals; high profile marine species include sharks, whale sharks, rays and cetaceans. No other site in the world can offer such a diversity of marine life.

Furthermore, the Marine Reserve, situated at the convergence at latitude cero of 3 major eastern Pacific currents and influenced by climatic phenomena such as El Niño, has had major evolutionary consequences and provides important clues about species evolution under changing conditions. The direct dependence on the sea for much of the island’s wildlife – seabirds, marine iguanas, sea lions, amongst others- is abundantly evident and provides an inseparable link between the terrestrial and marine worlds.

Underwater geomorphological forms –consisting of three major tectonic plates—Nazca, Cocos and Pacific— is an added value to the site producing a unique display for science, which also cannot be found anywhere else on the planet.

Within our program of OCEANS, SELVA-Vida Sin Fronteras concentrates its efforts in protecting the Galapagos Archipelago & Marine Reserve in accordance to UNESCO guidelines, but with one major difference in objectives. While UNESCO emphasizes the international obligation to safeguard this exceptional and irreplaceable eco-system “FOR” Humanity, SELVA-Vida Sin Fronteras believes that this Jewel of Nature – very much like the Amazon- has to be shielded not “FOR” but “FROM” Humanity.

As absurd and inconceivable as it may sound, the Archipelago and its Marine Reserve is critically endangered by human activity; in particular by overpopulation, by a saturation of tourism, by over fishing and the illegal practices of this industry -as evidenced by the massive presence of Chinese, Ecuadorian and other fishing fleets-, by shark finning, by the trafficking of endemic and endangered species. 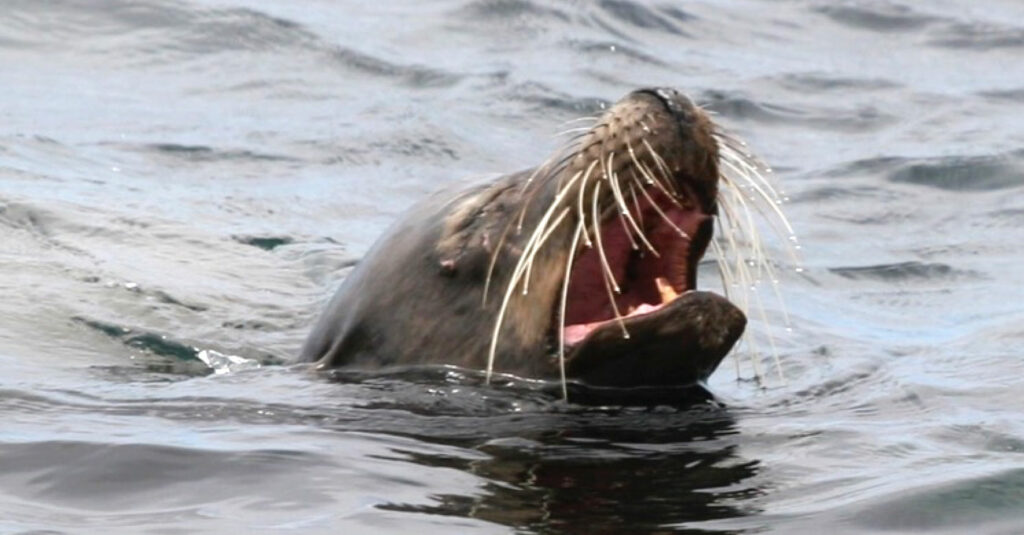 Executive President of SELVA-Vida Sin Fronteras, Mariana Almeida, has been actively committed to environment protection in Galapagos since 1980, as highlighted by several ground- breaking achievements.

The first was purchasing the maxi-catamaran “American Enterprise”, with the objective of promoting scientific research, educational awareness and to monitor the environmental impact of economic activities in the region; fishing and tourism in particular. For the better part of a decade, scientists and crew members aboard, undertook an in-depth analysis of the Marine Reserve, identifying the habits and migration patterns of endangered species. Special emphasis was placed on illegal fishing in the Reserve, and uncovering an extensive network engaged in the illegal trafficking of, in particular, shark fins, sea cucumbers, sea lion penises and sea horses.  The different actors involved were identified; starting from small speed boats registered in Galapagos, their encounter with national and international vessels on the edge of national waters to offload the unlawful cargo, which then arrived in Manta or La Libertad, and later transported to Hong Kong and Japan, via Peru.

According to research on the impact of catastrophic overfishing in the region combined with climate effects could cause an ecological collapse.

The world cannot allow the future of fishing in the East and South China seas, which could conclude that the next 10 years determine the fate of the regions and would have a ripple effect on the rest of the world.

It is time to seriously undertake the defense of our oceans, our fate cannot depend on the impact of Chinese overfishing.With the momentum on our side, the Ecuadorian Environmental Police agreed to participate with the co-founder organisations of the International Environmental Mission, and address the problem of illegal fishing and trafficking of endangered species in Galapagos. With Sea Shepherd co-organized and participated in 7 operations during which a historical record was achieved including the decommissioning of 40,000+ shark fins and 93,000+ sea cucumbers, originating from the Galapagos Marine Reserve.

SELVA-Vida Sin Fronteras strongly opposes the presence of the Chinese fleet around Galapagos and the evident negative environmental consequence. We are aware and disturbed by the fact that the Chinese commercial fishing fleet is responsible for considerably more IUU fishing than that of any other nation according to the UN Agency, FAO. China doubles the global per capita consumption of fish, is the principal importer and exporter of shark fins, and since 2020, has the world’s largest distant waters fishing fleet with nearly 17,000 vessels, mostly registered in China but with approximately 1,000 registered under flags of convenience. China is ranked poorly in compliance with international distant waters fishing regulations both as a flag state and a port state. FAO also suggests that China is catching an estimated four million tons of fish too young or small for human consumption every year, exacerbating the country’s over-fishing that is decimating fish stocks around the globe.

China does not provide details or statistics for the amount of fish and other species they indiscriminately catch around Galapagos. Nevertheless, two documented cases of their practices are particularly concerning. The first in 2017 when the Ecuadorian Navy seized the reefer vessel Fu Yuan Yu Leng 999 inside the Galapagos Marine Reserve with over 6,000 frozen endemic, protected and endangered sharks, including whale sharks.

SELVA-Vida Sin Fronteras has no words to describe this tragedy or “Ecocide”, other than reminding human society  that  they kill more than 100 million sharks worldwide each year, including tens of millions of sharks for their fins. As apex predators, sharks help mediate healthy ocean ecosystems and assist in maintaining a balanced biodiversity by preventing overpopulation of prey species, and preventing these from dominating a limited resource. The role of sharks in managing the marine’s environment is essential and without them the infrastructure and balance of the ocean’s ecosystem would be threatened. 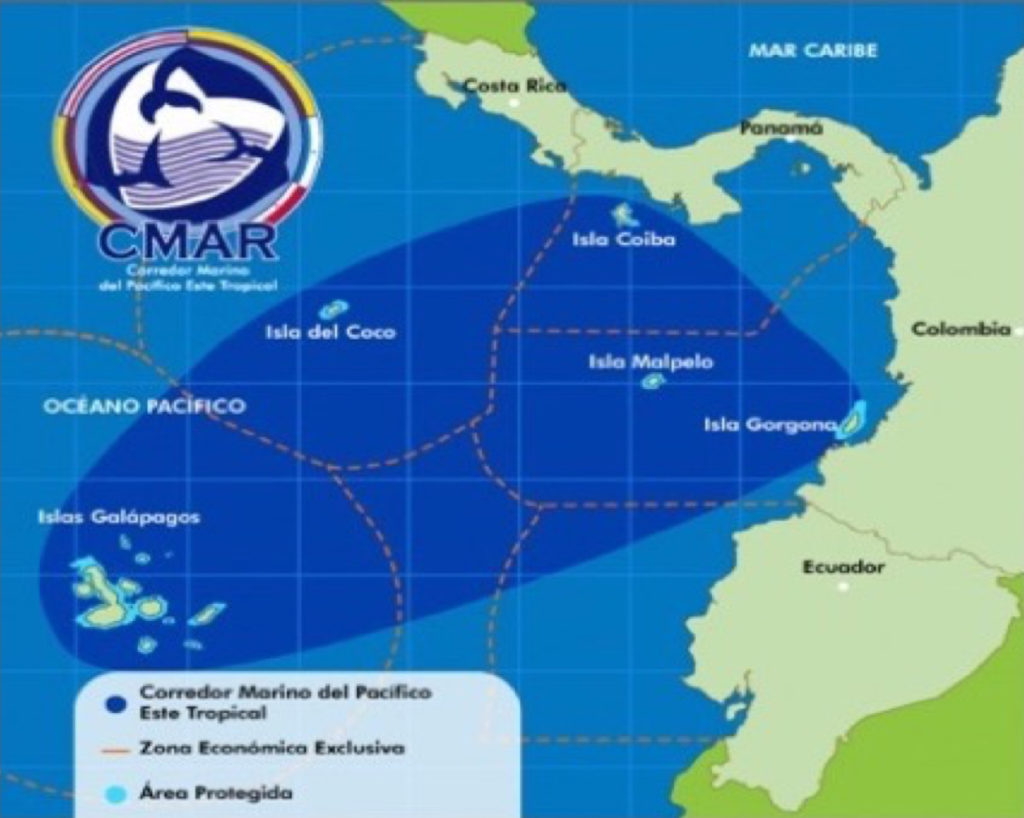 SELVA-Vida Sin Fronteras is committed to end the assault on the Galapagos Archipelago & Marine Reserve, shark finning in particular.  We propose that a viable solution is Declaring the Corridor of the Eastern Tropical Pacific (CMAR), a Marine Reserve that strictly prohibits all forms of extractive industries; fishing and underwater seabed mining in particular. CMAR encompasses: the oceans surrounding:

SELVA-Vida Sin Fronteras is suggesting that all Nation States, the regional Riparian States in particular, Multilateral Organizations, NGOs and Civil Society ratify CMAR and participate in strictly monitoring, patrolling and defending the Reserve. This should effectively protect the unique and endangered species that exist and migrate predominantly within the Oceans of this region.

Our campaigns require an active international consciousness, participation and support, if they are to succeed. Within this context, the question we should all ask ourselves is:

If we cannot even protect the Galapagos Archipelago and Marine Reserve, then what is our real capability and intention of safe guarding the environment for our future generations? Where is our empathy for all forms of life?

We need to join forces, stand up firmly to conserve nature, TAKE ACTION NOW, PLEASE DONATE, and have the courage to do so, as Aristotle suggested many centuries ago:

“Courage is the first of human qualities because it is the quality which guarantees the others.”